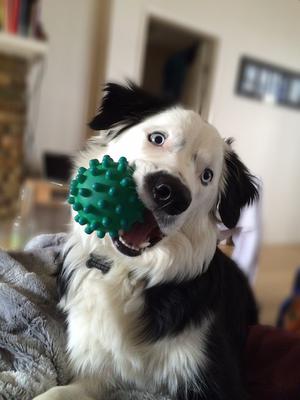 Hi, I am writing this because I feel like I am failing my dog, Banjo. He is a 1 yr old border collie that I have had since a puppy. Around 4 months ago he developed a tendency to be fearful towards strangers that has escalated to the point where I cannot have him off leash on my own property because if any stranger approaches he runs and barks at them and has nipped at least 3 people. Luckily, all of these people were understanding. However, it is becoming a huge issue and I have tried every approach to get him out of it. He has been to obedience training and I have had little to no success with many tactics including introducing him to many people with treats when he exhibits fear. The problem seems to stem from him being overly protective towards our home, myself, and my partner. It is extremely disheartening because he is an absolutely amazing dog in every other scenario. Once he meets someone he rarely shows aggression again and usually doesn't react when he is off leash and around groups of people. He loves other people to the extent that he gets so excited when he sees them that he still has 'accidents' (this is only with one or two girls for some reason).

Anyways, looking for any suggestions. I need to break him of this or I fear that eventually someone will press charges or he will attack someone.

Side note, he also gets a ton of exercise so I doubt it has any relationship to him feeling pent up - I work as a tree planter and he would come to work and run around all day long chasing sticks that other workers would throw.