by Brooke
(Virginia Beach, va, US) 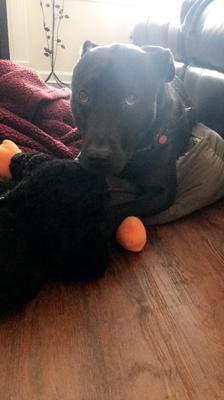 So I got my 2 and a half year old lab mix when he was about 3-4months old and my sister has his brother. They both were like playful normal puppies.. as they got older they were always anxiety ridden... no matter how much love and socializing we did. They both were very protective over my sister and I, but most of the time we could stop the barking and they were never fear biters.. we did have to separate them due to getting them getting jealous of one another and my dog was getting better then he recently started getting worse.. he’s terrified of my boyfriend and we all live together 24/7.. he has gone out of his way numerous times to love on Tobi but tobi just shuts down.. now it has gotten to the point where if I’m in a room
And my boyfriend leaves and comes back in tobi goes after him and now lunges at him like he is going to do something.. I don’t understand why... I’ve never had a dog act like this and I’ve had 4 growing up before them both. I know they were feral puppies when we got them from a rescue but I’m terrified he is going to hurt someone or another dog .., he is my baby and I just want to help him get better ..any help is appricated.