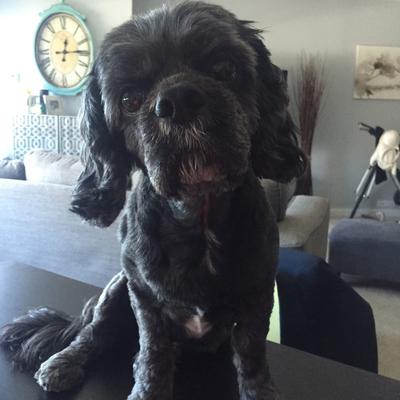 I have had my dog Wrigley since he was 10 weeks old. We have a few issues going on with him and would love help. I know money shouldn't be a problem but in the city of Chicago Training on Aggression is very pricey and I'm hoping to get some advice.

1st Aggression toward people...
5 years ago Wrigley was getting bad ear infections. We took him to a vet and he said it was just a icky ear and to keep cleaning it it will get better. so he gave me some good cleaning solution and I did just that. He would eventually hear the crinkle of the bag and run from me. So we knew something else had to be wrong. He was getting his haircut soon after and the girl told us we should get it rechecked. We brought them to a different vet and he had a double ear infection for almost a year. Poor guy but then we had to fix that so I had to give him drops and still he would run from me until one day HE BITE ME!!! His ear got better but his aggression got worse. Every time he felt fear he attacked me. Even when I was displining my other dog he attacked me. We took him to vets asked what we could do looked up his breed. They just said he put fear and me together and the Shitzu breed gets aggressive with age. So we put him on doggy Xanax. It helped through the years fewer episodes. Then the aggression was not just towards me it started happening to my husband, my father, and then my friend. Just saying bye to him when he was still in bed he would attack us this has happened many times to me and then a few to my husband but then recently to my father. May friend came over and was saying hey buddy how are you doing (he was hurt from a dog fight) and he jumped and attacked her. While staying at my moms house while I was away. they said he seemed nervous and said lets go outside and then attacked. Just today I tried to trim his hair and he attacked me. He has never had any problems at the groomers so I figured he would be fine with me trimming it since he hasn't had an episode lately. Well I was very wrong. Every time he stops you can see he feels bad he sits by my feet or just looks at us. I hate that I can't do simple things with him cause I don't know if he is on edge and will attack me. I can't travel anywhere because everyone that has watched him he has attacked. Im also afraid to board him cause Im not sure if that will create more aggression with me from leaving him. My hands are tied and don't know what to do.

2nd aggression with dogs.....
He was always around other dogs at dog parks, cousins, and we got him a brother when he was 3 years old. When we moved to the city we had an incident where 4 big dogs were chasing him at a dog park when he was younger. He hasn't liked big dogs ever since. Very skittish of them then started attacking them. He just got into his first real dog fight 4 months ago where he got bit back. Which we are very lucky this was the first time. I have learned to let him meet the other dogs I pet the other dog sniff and he can see they are nice then most of the time he is fine with them. Its when they are high energy dogs and dogs that won't leave him alone and the dogs he jumps at and attacks. This happens on a daily bases. Small dogs don't bother him its just large dogs.

Please any advice or help is appreciated.